As seen in the Tigard Times
Saturday, April 12, 2007
BY MIKEL KELLY

Mark Stewart pauses outside his new office in downtown Sherwood. Stewart designed the house which will be featured on ABC’s “Extreme Makeover: Home Edition” on Sunday, April 22, at 8 p.m. on KATU-TV.

When ABC’s “Extreme Makeover: Home Edition” airs a week from Sunday, nobody will be paying closer attention than local home designer Mark Stewart.

Stewart, about to move from his Tualatin office to brand new digs in downtown Sherwood, designed the 4,000-square-foot prairie-style house in Lawton, Okla., that stars in next week’s episode. 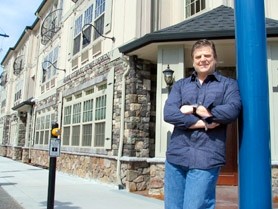 The show will air on KATU-TV at 8 p.m. Sunday, April 22. The four-bedroom, 4½- bathroom home was designed pro bono for the Westbrook family which is recovering and coping with an injury that occurred during Mr. Westbrook’s tour in Iraq, leaving him without the use of his legs.

A spokeswoman for the show called “five or six weeks ago,” said Stewart. “She introduced herself and said, ‘I need a home designed for this couple in three days – and we’re not going to pay you for it.'”

Apparently his name had been passed along by designer Preston Sharp, a fan of the prairie style originated by architect Frank Lloyd Wright and a specialty of Stewart’s Mark Stewart Home Design.

“I think the house was built in a week,” said Stewart.

“Mark Stewart’s design was a great hit,” said Ron Nance, builder for the Oklahoma project. “The home is beautiful and phenomenally functional for the Westbrooks’ needs. We were told over and over by the cast and crew that this was their favorite home.”

Another bit of distinction lies in the fact that Stewart was the first outsider be asked to design a home for the show, now in its fourth season, which has won back-to-back Emmy Awards as Best Reality Program.

Each episode of the popular program features a race against time on a project that would ordinarily take at least four months to achieve, involving a team of designers, contractors and several hundred workers who have just seven days to completely rebuild an entire house, including interior, exterior and landscaping.

It is insane designing a home that fast, said Stewart, pointing out that they needed a completely original design tailored to that specific building site. It is equally nutty that the show’s crews build the entire home in just a few days, too. 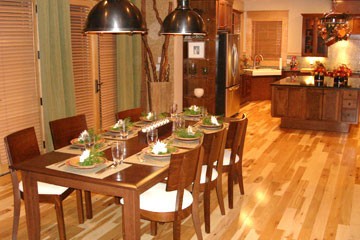 “They’ve got it figured out now to where they build a pretty good house,” said Stewart. “They aren’t just thrown together.”

So, would he go through that experience again?

And the reason, he insisted, was because the show makes such a tremendous change in the lives of the family.

“In the end, what they do is take a family whose life is in the toilet because (the house) doesn’t work for them and completely change their lives in a week,” he said. “The only weird part is it was done so quickly. It was done at light speed.”

“They’re actually really doing it because they believe what they’re doing is important.”

“We are honored and have been touched by the ‘Extreme Makeover: Home Edition’ experience,” said Stewart. “The work they are doing, one family at a time, is a true testament to the kind of thing this world needs more of. 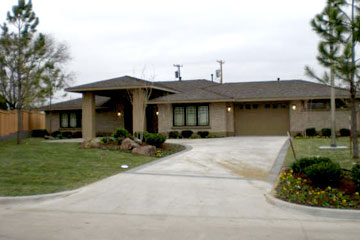 “The Westbrook family home we designed was an inspired design – inspired by the family as well as the ‘Extreme Makeover: Home Edition’ crew.”

For the past seven years, Mark Stewart Home Design has been located at 8137 S.W. Seneca St. in Tualatin, but that is just now about to change. Stewart is opening a new office, at 22582 S.W. Main St., in downtown Sherwood, in a couple of weeks – on April 25, according to the schedule.

At the same time, the firm expects to open a second office in Bend, at 750 Charbonneau in Northwest Crossing.

The Sherwood office will house 12 people, and visitors to the new location will find a 3,500-squarefoot space full of rich colors, a mixture of materials that includes wood and stone and an assortment of amenities for clients.

“It’s a little bit of a challenging location,” said Stewart of the Sherwood site. “When customers who we need to see in person get here, we’re going to have quality coffee drinks for them and other little extras.”

But, he added, it’s not necessary for customers to come to the office for “70 percent of the business.”

“Four years ago it became clear I wanted to own my own office because I was sick of paying rent,” said Stewart.

Now, for the first time, he has the opportunity to make an office look the way he wants it to.

“We’ve been operating for 25 years in rented spaces, which we’ve always had to kind of patch together,” he said. “At a certain point, if I go to somebody who’s going to design my home, I kind of want to like what I’m seeing.”

The goal here, he said, is to instill the thought: “Well, if somebody can do this, maybe they can at least do my house.”

Stewart lives on the Willamette River at Newberg.